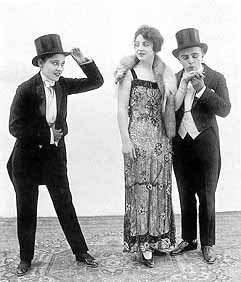 Charles Parrott got the idea for The Danger Girl after seeing Gloria drive like a speed demon through the Keystone Studio gates one day. Wallace Beery had been teaching her to drive and Gloria loved the power she had behind the wheel.

The story revolves around a girl who desperately wants to be a race car driver and disguises herself as a man in order to pull off the charade. It was one of the first roles that Gloria really sank her teeth into and she worked hard at perfecting her part.

Next film - Love on Skates