You Can't Believe Everything 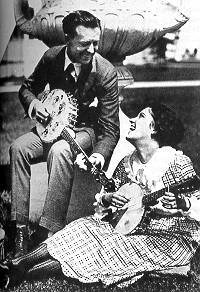 
Plot: A reckless society girl becomes a mature woman after falling in love with a man she rescues from drowning.

This was Gloria's first film with Triangle and director Jack Conway and the Triangle executives were so impressed with her that they decided to build her up to star status. This film was to be her important introduction, so they decided to hold it back and let her film two other pictures (Society For Sale and Her Decision) with big name male actors so the public would get to know her. Conway advised Gloria on her acting (and she later stated that he taught her many new techniques about film acting) and he photographed her with the utmost care. The results were amazing and Swanson was on her way to stardom.


Next film - Society for Sale