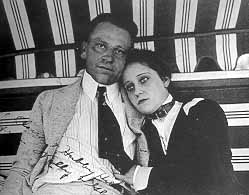 Beery began his film career at Essanay a few years before Gloria started working there. He gained popularity in a series of short films in which he played a Swedish maid (in drag) named Sweedie. Gloria herself appeared as an extra in one of the Sweedie comedies (Sweedie Goes To College). Beery took a liking to Gloria but she was not interested in him and thought that he was old enough to be her father. A few months later Beery left the Chicago Essanay studios and headed for California. It was rumored that he had gotten himself in trouble with a young woman on the set.


Beery later sent Gloria a postcard and urged her to come to California and work in the film industry there. She agreed, and with her mother in tow, joined Beery in California. With Beery's help, she was immediately hired by Mack Sennet and cast opposite Beery in A Dash of Courage. Gloria was pleasantly surprised to find that Beery had changed and was not the big flirt that he used to be. After a brief courtship, they were married.

Their marriage was a disaster from the very beginning. On their wedding night, Beery got drunk in the hotel bar and raped Gloria when he returned to their room. When she suggested that their marriage had been a mistake a few weeks later, Beery brushed her away and told her that things would get better. The situation was not enlivened by the fact that they lived with Beery's parents, whom Gloria found icy and distant.

Gloria was elated a few months later, however, when she discovered that she was pregnant. One morning she awoke with severe cramps and asked Beery to go get her something for the pain. After a whispered consultation with his mother, Berry left only to return a few minutes later with a bottle of medication. Gloria took it without asking any questions and later became nauseous and passed out. She awoke to find a nurse in her room who told her that she had lost her baby. She later discovered that Beery had obtained the medicine from a local pharmacy and that it was a type of poison. They had been married for only two months and Swanson's first marriage was over.

Wallace Beery gained great success during the 1930's and he won an Academy Award for his performance in The Champ in 1932. He was very popular with the public (especially in rural areas) and he made films up until his death from a heart attack in 1949. 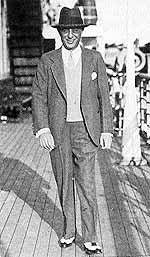 Somborn was the president of Equity Pictures Corporation when he introduced himself to Gloria one night at a Hollywood restaurant. He later invited her to a dinner party at the home of actress Clara Kimball Young. At the time, Swanson had been seeing a Pasadena millionaire playboy named Craney Gratz but she had become disillusioned by his inability to commit to a marital relationship. Somborn flattered Gloria with flowers and dinner party invitations and proposed after only a few weeks. Gloria waited one week to see if the proposal would have any effect on Gratz and when it did not, she accepted Somborn's proposal.

Eventually Gloria realized that the marriage to Somborn was yet another mistake. She had married a man whom she really did not love and a man who functioned as more of a father figure and business manager rather than a husband. They did have one daughter, named Gloria (obituary), which fulfilled Swanson's desire to finally have children. Later, she adopted a son named Joseph (news item).


After one year of marriage, Swanson and Somborn separated but did not immediately discuss divorce. Gloria began to see director Marshall Neilan but was aware of the increasingly puritanical attitude that was pervading Hollywood especially from the Hays Office which was created to maintain a standard of decency in the film industry. Somborn, apparently aware of a good scheme when he found it, had his lawyers serve Gloria with divorce papers on the basis of an extramarital affair not only with Neilan but with 13 other men! Most of the accusations were ridiculous (Cecil B. De Mille was one of the men named) but since the Neilan affair was indeed true, Gloria was advised to settle with Somborn out of court to avoid a scandal. At first she refused to succumb to blackmail but eventually agreed to a settlement in order to avoid harming her career. She never forgave Somborn for his outrageous tactics but he did remain close to his daughter.

Somborn went on to open the famous Brown Derby Restaurant in Hollywood. He died of cancer in 1934. 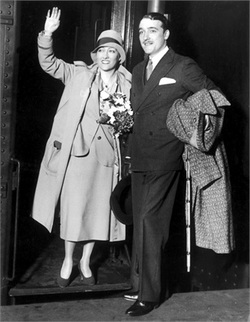 Swanson's third and most famous husband was a genuine Marquis, albeit an impoverished one. She met him when she went to France in 1924 to film Madame Sans Gene. Henri (his first name) was hired as an interpreter for Swanson because she did not speak French. They became quite fond of each other and Henri proposed marriage shortly before filming ended on Madame Sans Gene. There was quite a bit of hullabaloo regarding Swanson's marriage. She was already the most famous star in Hollywood and the fact that she was now a member of Royalty was just incredible. The publicity was tremendous and the Paramount Studio executives could not be happier with the fantastic press that Swanson would get.

They settled into Gloria's mansion back in Hollywood and were immediately bombarded with invitations. Everyone wanted to meet the Marquis! Gloria attempted to find Henri a job in Hollywood but soon discovered that although he was very congenial and everyone liked him, he did not possess the business sense and political savvy to deal with the sharks in Hollywood. He was given a job as a foreign representative for Pathe Studios in France which meant that he and Gloria would be separated for long stretches at a time. Eventually they grew apart and Swanson's affair with Joseph Kennedy and Henri's relationship with actress Constance Bennett did not help matters. Finally, Henri wrote Gloria a letter and amicably proposed a divorce. They remained friends and continued to see each other on social occasions. Henri eventually married Constance Bennett but they divorced in 1940. 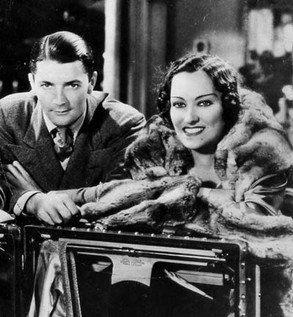 Swanson met Michael Farmer on a vacation to London following the completion of Indiscreet. Noel Coward introduced them and they later went on a sailboat cruise with Edmund Goulding. Swanson had no
intentions of marrying a fourth time but she found out that she was pregnant. Farmer insisted that they marry and Gloria herself felt that it was the only thing to do.

Gloria gave birth to a daughter, Michelle, on April 5, 1932. It was not long into their marriage that Gloria discovered that Michael was extremely jealous of her male acquaintances, including business associates and would go into periodic rages. She attempted to help the situation by getting him involved in acting and even arranged for him to have a role in her film A Perfect Understanding. The situation did not get any better, however, and the two were divorced in 1934. 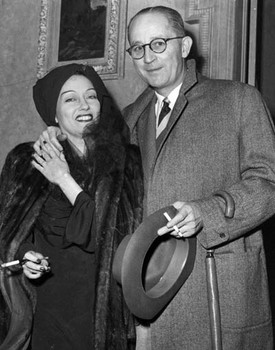 A very short story - Swanson met Davey while touring with a play in 1945. She had told herself that she would never remarry and claimed that she only accepted his proposal because he was rich and because her daughter Michelle was constantly nagging her to marry. A few weeks after the wedding, Gloria discovered William in a drunken stupor when she left the stage one night. She and Michelle attended an Alcoholics Anonymous meeting and obtained literature and preceded to spread the pamphlets all over the apartment. Davey apparently did not like the message and he packed all his things and left. The marriage lasted 45 days. 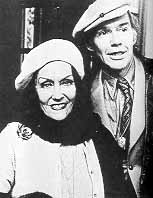 Swanson met her last husband in 1968 and they became very good friends. They shared an interest in health foods and nutrition. Dufty wrote a popular book called Sugar Blues in 1975 about the dangers of sugar in the diet. He also collaborated on more than 40 books, including Billie Holliday's "Lady Sings the Blues" in 1956. He and Gloria were married in 1976 and the marriage lasted until her death in 1983. Dufty died of cancer on June 28, 2002 at his home in Birmingham, Michigan. Read his obituary here.