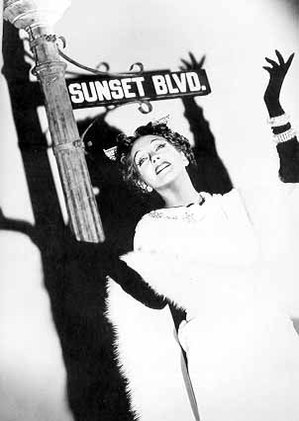 "The public, not I, made Gloria Swanson a star."
-Cecil B. De Mille.

"I won't be a second anyone!"
-Swanson to Mack Sennett after he said he could make a second Mable Normand out of her.

"I have gone through a long apprenticeship. I have gone through enough of being a nobody. I have decided that when I am a star, I will be every inch and every moment the star! Everybody from the studio gateman to the highest executive will know it."
-Swanson in 1922.

"Arriving with the Marquis tomorrow morning. Stop. Please arrange ovation."
-Telegram sent to Hollywood from Swanson on her way home from France.

"It's the saddest night of my life. I'm just twenty six. Where do I go from here?"
-Swanson to her mother following her triumphant return to Hollywood in 1925 after making Madame Sans Gene in France.

"Madame was the greatest star of them all."
-Max (Erich Von Stroheim) to Joe (William Holden)

"I am big, it's the pictures that got small."
-Norma (Swanson) to Joe (Holden)

"Look at them in the front offices. Good old masterminds. They took the idols and smashed them! The Fairbanks, the Gilberts, the Valentinos! And who've we got now? Some nobodies!"
-Norma to Joe

"We didn't need dialogue. We had faces. There just aren't any faces like that anymore. Maybe one. Garbo."
-Norma to Joe

"You see, this is my life. It always will be! There's nothing else - just us - and the cameras - and those wonderful people out there in the dark. All right, Mr. De Mille, I'm ready for my close-up."
-Norma, in the final scene