Teddy at the Throttle 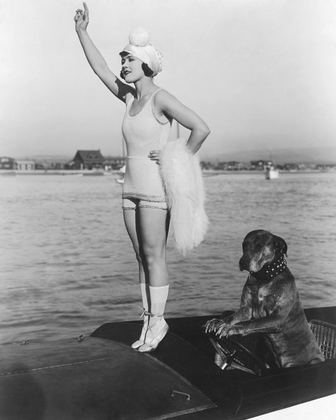 One of Gloria's most memorable Keystone pictures, Teddy At The Throttle has Gloria tied to the railroad tracks by villainous Beery while Teddy the dog rushes to her rescue. It was one of the first pictures where Gloria insisted on doing her own stunts and she won the admiration of director Clarence Badger and the entire movie crew. The major stunt called for a stunt man to crawl into a hole underneath the railroad tracks to escape the train. Gloria listened to the director's instructions and boldly interjected that she wanted to do the stunt herself. This would not be the last time that Gloria bravely did her own stunts.

Gloria had separated from Wallace Beery by this time and disliked being around him on the set. Badger, who was fully aware of the circumstances, tried to keep their rehearsals brief which Gloria was extremely grateful for.