The Nick of Time Baby 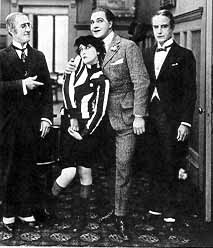 Another romantic triangle between Swanson (playing a fencing instructor), Earl Rodney and Bobby Vernon. Swanson was always adament that she was never one of the Sennett Bathing Beauties. The girls do appear in this film but of course Gloria is not one of them. The Nick of Time Baby also starred Teddy, a famous canine star at the time.

Next film - Teddy at the Throttle